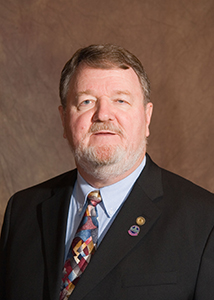 Mr. Brown holds a BS Industrial Technology from Ohio University and a MBA from the University of Dayton.

Mr. Brown is retired from the workforce after 43 years service with General Motors, Delphi and DMAX. His final position on July 13, 2008 was Supervisor – Safety / Security at DMAX, Ltd. in Moraine, Ohio. He was called back to DMAX in 2013-14 to support the safety department while they looked for replacement head. DMAX is a General Motors/Isuzu joint venture with 1000 hourly employees represented by IUE/CWA local 797 and approximately 200 salaried employees, including engineers and managers. The 700,000sqft plant produces the upwards of 900 DURAMAX diesel engines used in GM pickup trucks each day. Mr. Brown’s Leadership responsibilities included facilitating daily safety meetings, performing safety audits and advising business teams, including facilitating the annual joint audit performed by the IUE/CWA-GM. The annual audit covered 36 audit elements. Mr. Brown’s technical expertise was put to task overseeing effective implementation of the safety aspects during the design and installation of over 90 million dollars worth of machine tools. He visited the tool manufacturers in Japan, Spain and Germany for the machine runoffs and performed the safety assessments of the equipment at installation. While the plant OSHA recordable rate was 2.7 at the time of his departure, the site achieved a lost workday rate of zero with over 2.8 million hours worked and had maintained that performance over a year.

Prior to leading safety at DMAX, he spent 36.7 years with General Motors and Delphi. Initially starting out in plant engineering doing plant layout and OSHA program coordination at the Frigidaire Division, he ultimately became the Safety Supervisor at the Delco Air Condition Division of GM, responsible to lead the entire safety effort with 5 direct reports and 15 interns in their 3500+ employee, 4 million sqft. Facility. As Safety Supervisor, he was a very hand-on leader, performing safety audits, training, data collection and analysis, and addressing OSHA inspection issues and equipment reviews. He was also secretary of the divisional safety committee. His division was combined with Harrison Division GM and the plants jointly achieved the GM and Delphi president’s award for achieving a million hours without a lost workday three consecutive years and the State of Ohio award for having the lowest lost workday rate in the region four consecutive years. He utilized safety interns from Murray State University, Indiana State University and Sinclair Community College, two of which were eventually hired by his organizations. He also taught industrial safety, safety management and OSHA application classes at Sinclair Community College for 13 years.

An American Society of Safety Engineers (ASSE) member since 1977, he was co-founder of the Kittyhawk chapter in Dayton area and was the chapter’s second President. The chapter received the chapter achievement award in its second year while he was President. He was elected Regional Vice President (RVP) of region 7 in 1989 and a second term in 1991. There were 3000 members in 13 chapters in 5 States and he held regular Regional Operating Committee (ROC) meetings and many of the chapters were selected for the chapter achievement award (CAP).

In 1997 he was again elected as RVP of region 7 and was re-elected in 1999. By now, the Region had grown to 27 chapters and about 4000 members represented in 6 States. He urged chapters to participate in the CAP award and many chapters achieved the award. A Safety Professional of the Year award was awarded to a Region 7 member for every year he was RVP.

As VPPD he was chair of the Council on Professional Development, member of the Congress of Councils, Board liaison to the Academy for Certified Hazardous Materials Managers and a member of the Compensation Committee. His council worked on determining the best approach in the distance learning arena for ASSE. He was chair of the Manufacturing Safety Symposium November 17-18, 2005 in Atlanta. He was elected as Senior Vice President in 2006 and subsequently was President-Elect and ASSE Society President 2008-09. As Past president he chaired the Nominations and Elections Committee for the 2010 Society election process. He continues to support the local Kittyhawk Chapter.

Mr. Brown has been involved with the Ohio Valley Section of the AIHA and was President in 1997 where he spearheaded updating the section bylaws and participated in the Ohio Title protection legislation for CSP and CIH designations. He is active with the national AIHA and was Chair of the Confined Space Committee in 2008-09 and is a member of the AIHA Safety Committee. He has arranged two roundtables on notable confined spaces and spoken at two roundtables on notable confined spaces at the AIHce’s.

He has been a board member of the Dayton Miami Valley Safety Council since 1979 and was the chair in 1981. He has participated in training programs and the annual one day safety conference in various capacities.

He was elected to the Board of Directors of the ISHM in 2007 and was Chair of the Board 2012-13 working on test question development and he edited the Board Guidelines document that all board members are to sign and adhere to.  He is currently president of the Veterans of Safety.

He has been involved in his local community being committee chairman of the local Cub Scout Troop for 4 years. He has been on the City of Fairborn Parks and Recreation Advisory Board, Personnel Advisory Board, Tax Appeals Board, and two terms on the Board of Zoning Appeals and was chair at one time of each of those boards. He also spent 5 years on the Capital Improvement Committee being chair for 3 of those years. He was president of the Fairborn Art Association twice and is currently chair of their annual sweet corn festival which is their major fund raising event. He is completing a term as president of the T.O.M. Club-a Frigidaire employee retiree’s club.